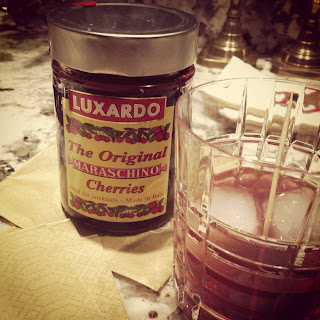 Luxardo Maraschino Cherries are still made ( in Italy)  from Marasca cherries and preserved in a marasca syrup.  There are no preservatives or thickening agents so they do not have a prolonged shelf life.  They are simply luxurious.

Also....and most importantly, they are the KEY ingredient in a proper Old Fashioned whiskey cocktail, which is what I'm enjoying as I write this.

Old Fashioned Whiskey Cocktail - my version
2 ounces Rye Whiskey
2 tsp water
2 dashes Angostura Bitters
splash of Cointreau ( in place of traditional simple syrup and orange garnish)
2 Maraschino cherries - one to eat while you make it, and one for garnish.

Combine all ingredients in a rocks glass, stir.  Add 2 cubes of ice.
Have a maraschino - and enjoy!