put the lime in the butternut.

There's no putting it off any longer.  It's soup season my friends, and there is no better ( or easier) soup for a cozy fall meal, than Butternut Squash Soup.  There are so many variations on this recipe, and everyone has their own preference. In order to qualify as a bisque, the soup must include cream and butter. Some versions are as sweet as pie filling, while others can taste bland and just plain "squashy".  I've been fiddling with this recipe for several years now, and I think it's finally "just right".  The secret ingredient is 1 dried lime.
I was introduced to dried limes, also known as black limes,  4 years ago, while shopping at a Middle Eastern market.  These limes have been a staple in Persian and Middle Eastern Foods for centuries,  but they do not overpower in any sort of "ethnic" sense.  They add a sweet, tangy,  slightly fermented element to what tends to be a fairly simple soup.  Similar to adding sour cream as a garnish, but with much deeper flavors. 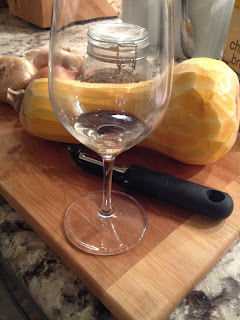 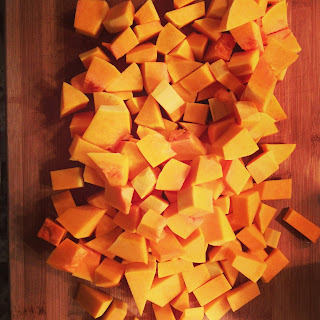 The most difficult part of this recipe is preparing the squash. Butternut squash is has a very thick skin, which needs to be peeled.  I use a standard vegetable peeler, and add a glass of wine ( for me) as good measure.   Once you've peeled the skin,  just chop it up into rough cubes and that's it.  The hardest part is over. 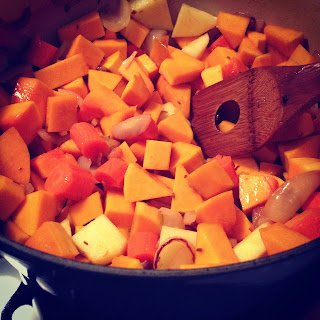 I made this for dinner one night last week, and added my roasted shrimp for a little protein.  I promise, the soup is so filling, and with the added shrimp, this is all you need for a simple weeknight supper.  I would also serve the soup as a early course at a dinner party. 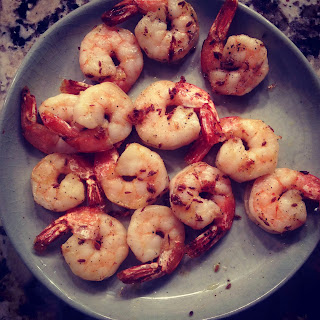 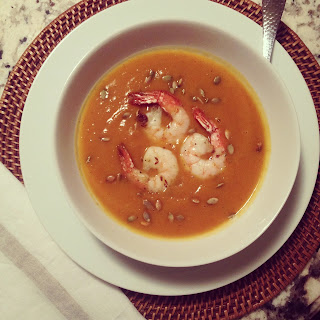 Directions:
pour a glass of wine..... ( i know it looks like a lot of directions below, but i promise this is not difficult)


Peel the squash with a vegetable peeler.  Cut in half lengthwise, and scoop out the seeds with a spoon (throw them away)
Using a large knife,  cut the squash into roughly 2 inch cubes ( or chunks).  This does not need to be pretty, as you will eventually be pureeing the soup.  Set aside.

Chop 2 yellow onions into a large cast iron pot.  I prefer Le Creuset, but any sturdy pot will do.  Add 2 tlbs of olive oil and cook over medium heat until onions begin to caramelize, about 8-10min.

Cut the leafy ends off the carrots and chop into 1/2 inch rounds.  Again, this can be a rough estimate.  Add to the onions, and stir a few times to coat with olive oil.

Leaving the skin on, cut the apple into a few pieces ( size doesn't matter here) and add to the pot.  This will add a bit of sugar, which will bring out the sweetness in the squash.

Add the squash to the pot and stir to coat everything evenly.  Pour the white wine in the pot, and continue to stir for a few minutes.

Add the stock, cumin seed, and curry powder.  Stir, and then bring the mixture to a boil.

Toss in the dried lime.  It will float at first, but as it rehydrates, it will start to sink into the liquid.

Cover and reduce to low heat.  Continue to cook on low heat for 1 hr, stirring every 10 or 15 minutes. After 1 hour,  remove the lid and, using fork, test the squash for tenderness.  It should almost come apart when pierced with the fork.

Remove the pot from the heat and let cool for about 15 minutes.   REMOVE THE LIME.  Once the soup has cooled a bit, it's time to puree.

MAKE SURE YOU REMOVE THE LIME.

Once you've pureed the soup,  taste for seasoning.  You will need to add salt - a little pinch or two at at time.   You can always add fresh ground pepper for a bit more kick.

If your soup seems a bit think, you can add more stock,  or water until you reach the desired consistency.

There are so many options when it comes to garnishing a soup.  This time I found some roasted pumpkin seeds in my pantry.  I drizzled each bowl of soup with a bit of honey,  sprinkled with a few pumpkin seeds, and added the shrimp for effect.  Sour cream would also be delicious, it's really up to you!