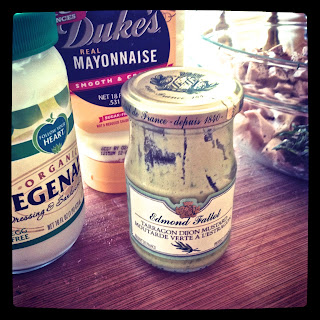 As much as I love the taste and texture of homemade mayonnaise,  I don't always have the time (or motivation) to whip up my own.  Despite my occasional bouts of culinary laziness,  I am still a devout mayonnaise snob.  Duke's mayonnaise is consistently the best you can buy.  First created in Greenville, South Carolina in 1917 by Eugenia Duke, the family recipe has remained the same for almost a century.  If you are of the vegan persuasion,  do not despair!  Vegenaise is a lovely substitute for the real deal.  The texture and tang of real mayonnaise is not lost in this vegan version of the creamy spread.

Last but not least, I must share with you this little gem of a mustard.  I was first introduced to Edmond Fallot Mustard when we were traveling in Denmark this past June - but more on that another day.  These Dijon mustard's are paired with herbs and spices such as tarragon, green pepper and cassis to create the most decadent spread one can imagine.